CS tell Ruto and explain why they will do more politics

Two cabinet secretaries who had been accused of campaigning for former Prime Minister Raila Odinga have vowed to continue playing politics.

Speaking in Nzoia on Monday, November 8, Defense CS Eugene Wamalwa and his Agriculture counterpart Peter Munya revealed that they would not give in to pressure from the vice president’s camp who lambasted them for their political commitments.

Wamalwa, in particular defended his actions, noting that the Kenyan constitution had granted all citizens political rights, including cabinet secretaries.

“We don’t want threats from anyone. I see a lot of intimidation towards the SCs. There are those who attack us that the SCs play politics.

“For the first time in history, the Constitution of Kenya provides for political rights. These political rights are guaranteed to every Kenyan, including CSs and county ministers, ”Wamalwa said.

Corroborating Wamalwa’s statement, CS Munya noted that all CSs accused of playing politics should not engage in any intimidation tactics.

Speaking to CS Interior Fred Matiang’i and his ICT counterpart Joe Mucheru, CS Agriculture advised them to stand firm in their actions.

“We know the law and there is no right in the Constitution that we will be told we cannot enjoy. We have the right to participate in politics and give political direction.

“So Matiang’i and Mucheru, don’t be intimidated by anyone,” he said.

On Saturday, October 30, the United Democratic Alliance Party (UDA), through its leadership, wrote to the Chairman of the Independent Elections and Boundaries Commission (IEBC), Wafula Chebukati, asking him to warn the CS against any campaign for presidential candidates.

The letter written by UDA General Secretary Veronica Maina stated that the Supreme Court, in the 2017 presidential election petition, ruled that the elections are not an event, but a process starting with the preparation of the reporting of results and that SCs should not be part of this process.

Maina said that when the CS openly declare their support for Raila Odinga, it is interference in the electoral process and called for the resignation of the Interior and National Government Coordination, Cabinet Secretary, Fred Matiang’i and ICT Cabinet Secretary Joe Mucheru.

In addition, Maina complained that the two SCs were included in a multi-agency team planning a free, fair and transparent general election, while the Constitution only authorizes the IEBC to supervise and conduct elections. She accused the two CSs of being intruders. 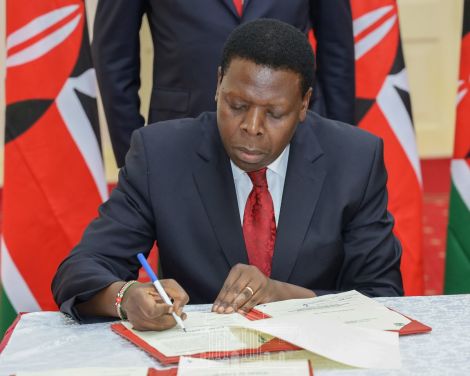