Kiminini MP Chris Wamalwa said cabinet secretaries (CSs) and civil servants should not engage in politics while retaining their functions.

According to Wamalwa, if agents engage in politics, it will compromise service delivery.

“CSs and other officials are not supposed to engage in politics, it’s very clear, it’s because it would compromise their service delivery,” Wamalwa said.

The politician asserted that these people should resign from their posts before venturing into politics.

William Ruto promises to protect his opponents when he wins the presidency: “Nitawapatia Askari Wengi”

“All civil servants, regardless of your FOI, commissioner or even SC, you must first resign before entering politics,” Wamalwa added.

Speaking in an interview with Citizen TV, he urged President Uhuru Kenyatta to reshuffle the Cabinet, particularly removing CS interested in politics.

“The president doesn’t have to wait until February; he should act quickly and reshuffle cabinet secretaries, especially those interested in politics,” he said.

The lawmaker has said these people should leave the office and play politics outside, not while in government.

He claimed that government officials who have started to engage in politics are tampering with service delivery because of a conflict of interest. ‘

“They are now using public resources for their own benefit, forgetting why they are in the office,” he noted. 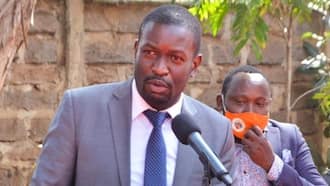 Edwin Sifuna Rubbisshes says ODM is obsessed with victory at all costs: “We believe in peace”

It was around this time that he also attacked the Rift Valley regional commissioner, George Natembeye, for “abandoning” his job.

The politician lashed out at Natembeya for focusing on his political ambitions while forgetting the security of the Rift Valley.

He said the attacks that were observed in Baringo and Laikipia were the result of the commissioner’s laxity since he joined the political arena.

“All the attacks are happening right under his nose because he has turned his attention to Trans Nzoia, where he wants to be the governor rather than serving the people of the Rift Valley first,” the politician began.

The Independent Elections and Boundaries Commission (IEBC) requirement states that officials who wish to join politics must leave the office by February 9, 2022.

The law requires that officials running for elected seats resign six months before a general election.

John Munyes (Petroleum and Mines), Simon Chelugui (Labor and Social Services), Fred Matiang’i (Interior Coordination) and Eugine Wamalwa (Devolution) are among the SCs who are said to have already been involved in politics at this time.